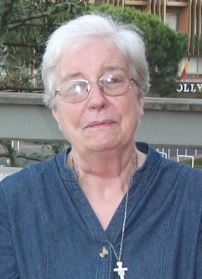 Sr Margaret died on 30 September after a very long series of illnesses.  She accepted illness with its associated challenges and inconveniences with a calm acceptance, preferring to challenge her energy into doing as much as she could for as long as she had left.

At her funeral in the Little Floweer Church at Kedron, Sr Patricia Treacy gave the remembrance of Margaret:-

In the Gospel reading of Margaret’s Funeral Mass we heard the words of Jesus, encouraging the disciples to have faith in him, promising that they will share in his life with the Father.  In sharing these memories of Margaret, I am very much aware that I am talking about a woman of faith.

When the notice of Margaret’s death was sent out , in response, we received an absolute deluge of emails from Sisters all over the world.  While expressing sorrow at losing Margaret, many wrote of their appreciation for the important contributions Margaret had made, remembrances of personal friendship with Margaret, happy memories of time spent with her. They describe Margaret using such terms as integrity, honesty, very fair, always encouraging.

Margaret was very generous in serving the community.  As well as her teaching assignments in primary and secondary school, she accepted many responsible positions: local superior, Principal of Mt Alvernia, Provincial Superior, General Councillor in Rome.

While Provincial Superior in Australia, she assisted in the process by which the Sisters of Papua New Guinea became an autonomous Province. They have sent messages expressing their gratitude to Margaret.

All who knew Margaret knew she had a big heart.  She loved her family and her community.  She had a wide circle of friends, she cared deeply for all of them, and kept in contact with her friends though separated by great distances and over many years.  Many of them have sent messages of condolence in recent days.   After serving two terms as Provincial, Margaret studied in the USA and qualified as a Pastoral Counsellor.  She found she had a great aptitude for this ministry.

Added to this big heart, Margaret also had the gift of empathising with troubled people who came to her for support.  She continued in pastoral ministry in schools and parishes for a good many years.

Appointed Treasurer of the Community in Australia, then later in Rome as part of the General Administration, Margaret had a talent for financial management.  She made wise investments and saw to it that funds were used where they were needed most.

Of the 10 years Margaret spent in Rome on our General Council, one of her companions wrote “She saved my life with a good laugh many a time in Rome! God bless her! She is happy now and putting in a good word for the rest of us, I’m sure!!”

During those years in Rome she was visited by some of her friends, one of whom wrote “Margaret gave me wonderful hospitality in Rome and Assisi, and drove me to La Verna where we stayed for a few days. She showed me how one drives in Rome by exercising eye contact with other drivers!”

We know that Margaret endured an amazing number of serious illnesses.  She managed to keep a positive outlook.  However, she used to joke that she was actually a very healthy person – in between bouts of life-threatening illness!  (Actually, an email from one of her friends suggested a “cat with nine lives”!)  The illnesses took their toll on her, however, as did the treatments, which were sometimes very severe in their effects.  But Margaret loved life, and she never despaired.  She was always willing to accept the advice of her doctors and was always grateful for their care.

Going back over 60 years …Margaret entered our community six months before I did.  A very early memory I have of Margaret, was when we were both postulants; Margaret, being ahead of me, was about to begin her Novitiate. In fact she was engaged in hemming the brown habit she would receive when she became a novice at Reception.  She held it up to show me “Isn’t it beautiful?” she said, full of enthusiasm.  I didn’t want to be impolite, but in fact it was the most shapeless garment I had ever seen.  At that time, we believed that we would be wearing that shapeless brown tunic, with our Franciscan cord, for the rest of our lives.

Then, of course, came Vatican II.  All aspects of our life came under scrutiny, we had to discard unimportant customs, and identify the essentials of being faithful to our vows in the modern Church and the modern world.

Our understanding of theology took on a dynamic aspect in the years since Vatican II, with new insights into the mysteries of our faith and a deeper appreciation of Creation, not as a world that was produced miraculously in 6 days, but as the ongoing action of God as Creator, an ongoing action in which we take part.  We came to see that we share responsibility for the development of our world, and of the whole cosmos, and that working for justice, freedom and peace is an essential part of that responsibility.  Margaret embraced the evolutionary spirituality that followed from that Cosmic view of Creation.   Her faith was strong, and as she approached the end of her life, she looked forward to the mystery of another kind of life to come.

Margaret grasped what St Paul wrote about in the first reading we heard. There is a mystery, a wisdom, which can be glimpsed by the person who is in touch with God’s love and God’s Spirit and God’s creative power.  That love is strong enough to overcome the fear that comes with the approach of death.  Margaret is now at peace.

Goodbye Margaret, until we meet again.