Francis of Assisi, the world’s most loved saint, wasn’t always a saint.  As a young man, he was the spoiled and popular son of a wealthy cloth merchant in the town of Assisi.  He was the leader of the crowd of young men who knew how to spend money and enjoy themselves, with music and songs and fun. 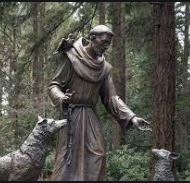 Along with the troubadours Francis sang of chivalry and noble deeds.  It was a time when there were many causes to command loyalty.  Petty noblemen, whether followers of the Emperor or of the Pope, were often challenging one another.  Francis and his friends were ready to fight to defend the rights of their town.  Francis himself had great ambitions to win glory in battle and become a knight.  With plenty of money, he was able to equip himself for battle in a splendid manner.

In Francis’ youth, several events brought about significant changes in his attitudes and way of life.  A battle with the neighbouring town of Perugia led to Francis’ capture and a year long imprisonment, after which his taste for merrymaking seems to have waned;  a dream in which he was confronted with conflicting loyalties – “Which is better, to serve the Master or a mere servant?”- a new taste for solitude and prayer and a search for guidance; generosity and openheartedness to the poor;  an encounter with a leper, offensive to Francis’ fastidious tastes and habits – suddenly he felt inspired to reach out in kindness to this pathetic individual;  the voice of Christ, speaking to him from the crucifix in San Damiano “Francis, go and repair my house!” – the overwhelming revelation of God as Infinite Goodness and the source of all goodness;  the realization that good things were not to be grasped and held, the poetic hea rt of Francis seeing Poverty as a Lady be served.

One day when Francis heard the Scripture being read in church, that anyone who wished to be perfect should give all his goods to the poor, and take up his cross and follow Christ, he realized that he was being cal

led to live according to the Gospel.  He wrote a simple Rule of Life, made up mainly of these Gospel passages, then with a few followers, he went to Rome and asked the Pope to approve what he had written as a way of life.

Francis and his brothers travelled about the countryside, “following in the footsteps of our Lord Jesus Christ”, preaching a simple message of penance and

repentance.  Hearing news of the Crusades, by which Christian armies were trying to win back the Holy Land, now occupied by Saracen forces, Francis set out for Damietta to preach to the Crusaders. He even crossed the enemy lines and was taken into the presence of the Sultan, Malek El-Kamil.  Their meeting was cordial, and conducted with mutual respect.

A few years before the end of his life, Francis’ identification with Christ reached a new level.  He was praying to feel the suffering of the Saviour in his Passion, and to experience his great love for sinners.  During his prayer, the wounds of the Passion appeared on Francis’ hands, feet and side, a source of anguish and ecstasy for the rest of his life.

As followers of St Francis, we too live a Gospel way of life, we praise God the author of all good things without wanting to grasp and hold many possessions, we rejoice especially in the beauty of creation and accept the responsibility to care for our earth.

Elizabeth Hayes was born in the Guernsey Islands to genteel parents. 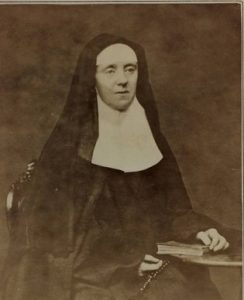 Within her family were Anglican clerics, teachers, and renowned Oxford Church musicians. As a young woman she travelled to England and began to work in a school and shelter for poor woman in Wantage. In the mid-nineteenth century during the Oxford Movement, Elizabeth Hayes left her life as a sister in the Anglican Church in England to embrace Catholicism. Through a life of prayer and reflection, Elizabeth came to know and trust the Spirit of God within her.

She received her initial formation in the penitential lifestyle of Francis from the Franciscan Sisters, Glasgow, Scotland. On November 26, 1859, as Sister Mary Ignatius, Elizabeth made her total commitment to Christ. In addition to the vows of poverty, chastity and obedience, she made a fourth vow to dedicate her life to the foreign missions. She was ready to leave home and country to reach out to all people wherever she saw a real need. It was this vow that led the future founder to begin her pilgrimage from Glasgow to Jamaica, to Paris, to Rome, to Versailles, to St. Thomas Island, to Boston and finally to Belle Prairie, in 1873. Within years she has established schools, a novitiate, and a printing press to establish the first Franciscan journal to be published in English.

From there she turned her attention to the black population of the South, who at that time, were the most underprivileged, deprived and humiliated inhabitants of the United States. By the summer of 1879 a small community of nine were ministering on the Isle of Hope, Diocese of Savannah, Georgia. In obedience to the Pope, she established a novitiate in Rome, an action that reflected her belief that our mission was not confined to the peoples of any particular race or country but that it was to extend to the universal Church.

The Legacy of Elizabeth Hayes

Elizabeth Hayes had a profound respect for the Franciscan Rule, believing that it essentially expressed the Gospel of Christ. She knew that her institute of Missionary Franciscan Sisters of the Immaculate Conception, unlike many others claiming to be Franciscan at the time, was firmly rooted in a tradition that could be traced back to St Francis of Assisi. (Francis founded his Third Order in 1214.) The family tree links Angela of Foligno, the Grey Sisters at Comines and later at Tourcoing (France), through to the Glasgow Franciscan Sisters (founded from Tourcoing in 1847). These Glasgow sisters trained Elizabeth in the Franciscan way of life, and sent her to their Jamaican mission. This rich legacy blossomed again through Elizabeth in late 1872 in Belle Prairie, Minnesota.

Elizabeth’s writings urged her readers to be led into a deeper experience of God’s love, and into the following of the example of earlier Franciscan Saints. She knew, and was also inspired by holy contemporary Franciscans. Elizabeth handed on to her followers special devotion to saints such as Anthony, Francis, and Clare. Many founders are associated with a particular place, but Elizabeth’s vision was trans-Atlantic. She modelled her dream of an international sisterhood and established her motherhouse in Rome. Elizabeth did not lock her sisters into one ministry, but showed by example that a variety of ministries was desirable, so long as they responded to peoples’ needs at the time. Besides the strong commitment of the last twenty-one years of her life to the ‘propagation of good books’ and Franciscan Journalism; she previously paved the way for ministries in education, foreign missions, assisting migrants and reaching out to the poor and needy.

Risk-taking was part of Elizabeth’s agenda; and she has passed on to her followers a desire to face the realities of life in bringing about God’s reign. In the nineteenth century she was aware of the need for lay associates; and through her monthly illustrated periodical, called the Annals of Our Lady of the Angels, she provided laity, as well as religious readers, with spiritual and entertaining reading. Many women who founded religious communities depended on a male figure to speak on their behalf, but not so Elizabeth Hayes. As an intelligent and well educated Guernsey born woman she saw herself equal to men, and was respected by them. She was once described as a commanding woman, but not a demanding one. An often over-looked legacy that she gave to North America is her achievement of bringing to that country the first Poor Clares, who stayed to found what is known today as the Mother Bentivoglio Federation.