Our formal Institute emblem is the San Damiano Cross with a Tau superimposed on the face of the cross. It was designed by Sr Patricia Treacy.

The San Damiano Crucifix was painted in the 12th century. 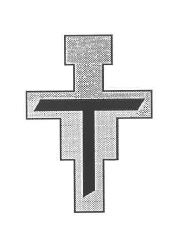 It is an important part of our spiritual legacy. In Francis’ time it hung in the small church of San Damiano in Assisi. St Francis waspraying before it one day in an attempt to discern what it was that God was wanting him to do. While he was deep in prayer the Crucifix seemed to come alive and speak to him “Francis go and repair my Church.” At that moment his life was given totally and radically to God. It hangs today in the Poor Clare convent in Assisi.

The Tau is an ancient symbol of repentance that can be traced to the Hebrew Scriptures. When St Francis left everything to embrace the life of a poor mendicant, he drew the Tau on his tunic as a sign of his dedication to God, and desire to renew his life. Consequently, wherever he lived, he always painted the Tau on his walls and doorway. The Tau reminds us that we too are called to be women of prayer and penance, giving ourselves wholeheartedly for the sake of the Gospel.

The logo of the Australia Sisters was designed by Brisbane artist Jenny Close and Franciscan Sr Catherine White. It features planet Earth embraced by the Sisters’ Emblem. It features Australian colours, and the stars of the Southern Cross are visible. It reflects the our special Franciscan spirituality which embraces all of creation, and marvels at the more recent scientific understanding of the universe which is our home.

The logo shows that even as we are united in one Institute across the world, so too the Sisters in Australia bring a particular flavour to what we do.