Kathleen Kirwan was born in England to Irish parents.  While Quentin had just one sister Victoria, she also had two Irish cousins Gwen and Eileen to whom she was particularly cl 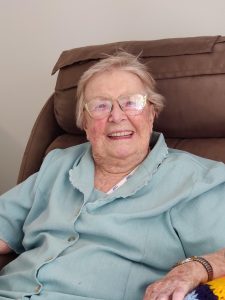 ose.   With a dream to go to the missions in Africa,  Kathleen entered the novitiate in Bloomfield in 1942 and made her first vows there in 1944 taking the name Quentin.  In 1946 she received a transfer to the mission in Australia and travelled by boat with Sr Mary Leocadia Prendergast.  It was a long twelve-week trip to a country very different to her own.  Quentin made her final vows in Kedron in Australia in 1949.

Quentin was a gentle, witty and peaceful person. While she is best remembered for her sense of humour and adventurous nature she could be quite anxious and even pessimistic at times. However, despite this her courage, connection with people, and desire for mission always came to the fore.  Surely she was the one of whom the prophet Isaiah wrote – How lovely on the mountains are the feet of the One Who brings good news; announcing peace, proclaiming news of happiness, that our God reigns.

Quentin was first engaged in primary education and spent twelve years in primary education in the Catholic schools in Kedron and Coorparoo. In 1958 her dream came true when she was missioned to Papua New Guinea. She taught in the classroom for a further eighteen years. When Independence brought the change of locally trained national teachers into the schools, Quentin moved into pastoral and catechetical roles. In every role she was able to easily connect with people.

In 1992 Quentin returned to Australia and embraced pastoral roles in North Rockhampton, Pottsville and Kedron. She gained a reputation as an entertaining and humorous public speaker and she was much in demand.  Eventually she was encouraged to write and publish her memoirs in her book the Ride of my Life. Then the book tours began…She retired from active ministry to Kedron in 2012 at the age of 90!

After Sr Quentin’s death the most commonly used words to acknowledge her life included happy, smiling, storytelling, missionary Quentie! The image that many mentioned was of tiny Quentin in a dress and veil, with a rucksack on her back, a staff in hand, in spiked shoes and socks setting out on some new or repeat adventure.

It was her love of people, however important or ordinary, across her various ministries that led me to choose the Gospel reading of today in which Jesus promises his followers that they would be fishers of people!  Quentin had a way with people – she caught them in. Not for herself but for the Good News. It was her mission.

Those who lived with her in PNG remember her long treks into the mountains on foot, scaling nearly vertical paths with her short legs and with endless energy.  The cover of her book pictures her in jodhpurs and long boots, still wearing a veil, atride on the of the mission horse, about to set off on a visit to one of the more isolated villages. Many remembered her sitting in the villages laughing and story-telling with the women and the men. And always laughter.  Wherever she went Quentin was with the people, in her simple way.

Some remembered her time at St Martins in Aitape where she not only formed the catechists, but she was the “hostess with the mostest” producing freshly baked cakes and other goodies for any visitors.  Some recalled Rockonia where she was always involved in celebrations and at tmes dressing up for specific events, or out visiting in the parish. Others remembered her years in Pottsville where after she could no longer walk the long distances within the parish she embraced the motorised scooter and would be out visiting parishioners for hours on end.

Quentin loved to reconnect with those who had lived in PNG.  It is wonderful that she was able to celebrate her 99th birthday just a few weeks ago with a group of ex PNG friends who hosted a morning tea for her.  That afternoon when I visited she recounted the event in minute detail and she was glowing.  That same afternoon because of infection in her legs and the terrible pain she endured she was admitted first to hospital and then to palliative care. Sadly she was never to return to Carseldine.

Quentin found being in aged care not to her liking at all – mostly it was the lack of good companionship that was the greatest burden.  She was not able to go out and about as was her custom and love. She  did not l;ike the idea of the activities that were available to her, preferring to stay in her room  and read.  The Covid lock downs were extremely difficult as she seemed to have phone problems throughout and was unable to have any visitors for several months.  She never complained and was grateful for any visit, letter, or phone call.

Quentin was a simple person with few possessions.  Mostly the things she kept were letters and cards from her many friends – it was people who were her priority. She was a fisher of people and she kept in touch with one magistrate from her PNG days and loved to read her letters as her career progressed to the International Criminal Court in the Hague. She also kept in c

ontact with parishioners and others from all of her places of mission.

Quentin often said that if some-one would ring her and ask her to go to PNG again she would accept – she didn’t feel any different in her spirit.  But then she would remember that she was barely able to walk.  Diminishment did not come easily to one with such a great missionary spirit.

The Gospel reading of her funeral invited us to put out into deep waters, and that is how Quentin lived.  At a young age she left her home country to travel to Australia, then set out again for Papua New Guinea. She spent 34 years there. Many remember the tales of her arduous and dangerous trips from Lumi and Fatima to the Sepik villages.  This entailed a four hour walk from Fatima, a flight in small plane to Aitape, a rough eight hour drive to Wewak, and finally a ten hour trip down the Sepik River in a dugout canoe with Fr Denis or another priest.  They visited the very isolated mission stations at Oum and Kubkain most months.  Quentin loved the drama of it all and relished the details of rats, crocodiles and life-threatening toilet breaks while in transit. She believed that she was the first white women the people had ever seen, and she was soon to be their friend!

Recently, at a meeting we reflected on what it means to put out into deep water as Jesus commanded – we heard the words of Dom Helder Camara

Pilgrim, when your ship

gives you the illusion of being a house;

when your ship begins to put down roots

in the stagnant water by the quay

PUT OUT TO SEA!

Save your boat’s journeying soul

and your own pilgrim soul cost what it may.

Quentin again and again you joyfully, set out from the harbour, and risked the deepest of water for the sake of the Gospel.  May the angels and saints now guide your pilgrim soul safely on this your last journey and may the One whose Good News you lived welcome you to your place of eternal rest and peace.